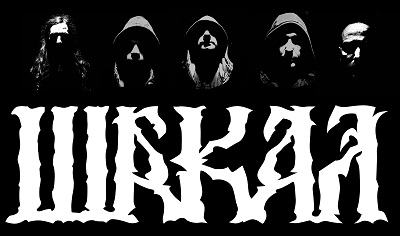 The new and another darkness is rising from Serbia! Šakal,it can be translated Jackal in English,will release their debut full-lengh album soon.There’s obviously 90’s black metal tone & atmosphere with big modern sound and it also represents their long time experiences.

We’ve already post an article introducing their new video on YouTube and thankfully we could have this interview. This is the first time for the band. That’s absolutely great honor for us!

L ,drummer of Šakal ansewed our questions and he tells us band’s story,their musical concept and small topics about Serbia and Japan. Let’s hear their first voices! We’ll see the darkness from Balkans…

1. Zdravo! Šakal! According to Šakal’s website or other social networks, the band was formed in 2021.  So, how did Šakal form? Could you tell us the band’s story from the beginning to present?

L: Konnichiwa!
Šakal was formed in late 2021 as an idea of a few friends who wanted to make music together. We made a few songs in a very short time so we decided to rehearse them and that’s the story.

2. Šakal’s website (http://www.sakal-official.com/) also tells us that members of the band are veterans of the Serbian Metal scene. But there’s almost no other information or past careers of each members.Is it secret? Do you think that those mysteries make listeners focus on your music?

– There is no secret behind it. The point is that we have collected a lot of experience in the last 20 years by playing in various bands, playing different instruments, playing gigs, and creating music. So now, when we create music for Šakal, we know exactly what we want to do and how to do it.

3. How did the band name Šakal come from? What does it mean?

– Šakal means Jackal in english. It came spontaneously and everybody liked it so we decided to keep it.

4. Currently two songs “Koledo” and “Dok Gorim” are available on the band’s Youtube channel. I feel that there’ a 90’s black metal atmosphere with modern sound productions. Do you agree with my impressions? Also what bands/genres are inspirations of Šakal’s music?

– Yes, it sounds like 90s black metal. We were very curious about how our songs would sound with modern, big sounding production and we were amazed with the results. It gave an extra dimension to our music.

5. What is the lyrical theme of Šakal? Could you explain it for our readers?

– All Šakal lyrics are inspired by Slavic mythology.

6. Šakal is going to release the debut full-length album called “Jav, Prav, Nav”. Is this correct? Is the album finished and when can we expect the release of it?

– That is correct. The album is finished and ready to be released very soon but at this point we still don’t have the exact date.

7. Have the band had live shows? Also are you going to play in Serbia or in other countries?

– We did not have live gigs yet. The priority was to finish the album first but we are rehearsing it for live shows in Serbia and in other countries as well.

8. From our point of view, it looks like there’s a nice metal scene in Serbia and we can find lots of active bands. But sadly it seems interests from the outside of the Balkan legion are not enough. What do you see in the Serbian metal scene? Popular or quiet?

– There are a lot of active bands in Serbia. I think that the majority of Serbian bands choose to play music as a hobby and don’t see it as a career.

9. Do you know or listen to Japanese (metal)band or artist? Do you have your favorite ones?

– Well, everybody knows Babymetal and they are a great way for younger people to discover the metal world.

10. What is your image of Japan? Do you have any favorite things from Japan?

– Japan is an awesome country. I’m sure every person would love to experience it.

11. Thank you and Hvala for taking your time and answering our questions! Do you have any additions? Finally,here is your space to spread your word freely for Japanese readers!

– You are welcome, thank you for contacting us and asking awesome questions.